How can we help you today?

A customized voice assistant is being rolled out in Idaho Falls to provide connections for senior citizens alone at home.

Rebecca Ricks, a caregiver with Visiting Angels, and Ed McKim pose for a photo at McKim’s home on Wednesday, Aug. 21, 2019, the Constant Companion tower is seen to the right of the telephone. McKim says the device, which allows him to make phone calls or call emergency responders by asking it to, offers him more independence and security. “I can call my daughter in New York just like she’s next door,” said McKim. “It’s handier than anything else.” McKim, 90, has macular degeneration and can’t see the numbers on his phone to make calls. “It makes me feel really good,” said Marilyn Culp, McKim’s daughter. McKim is part of a pilot program with Visiting Angels. Additionally, a call is made to McKim each night before bed to make sure he is ok and an email is sent to each of his kids to let them know he is ok. 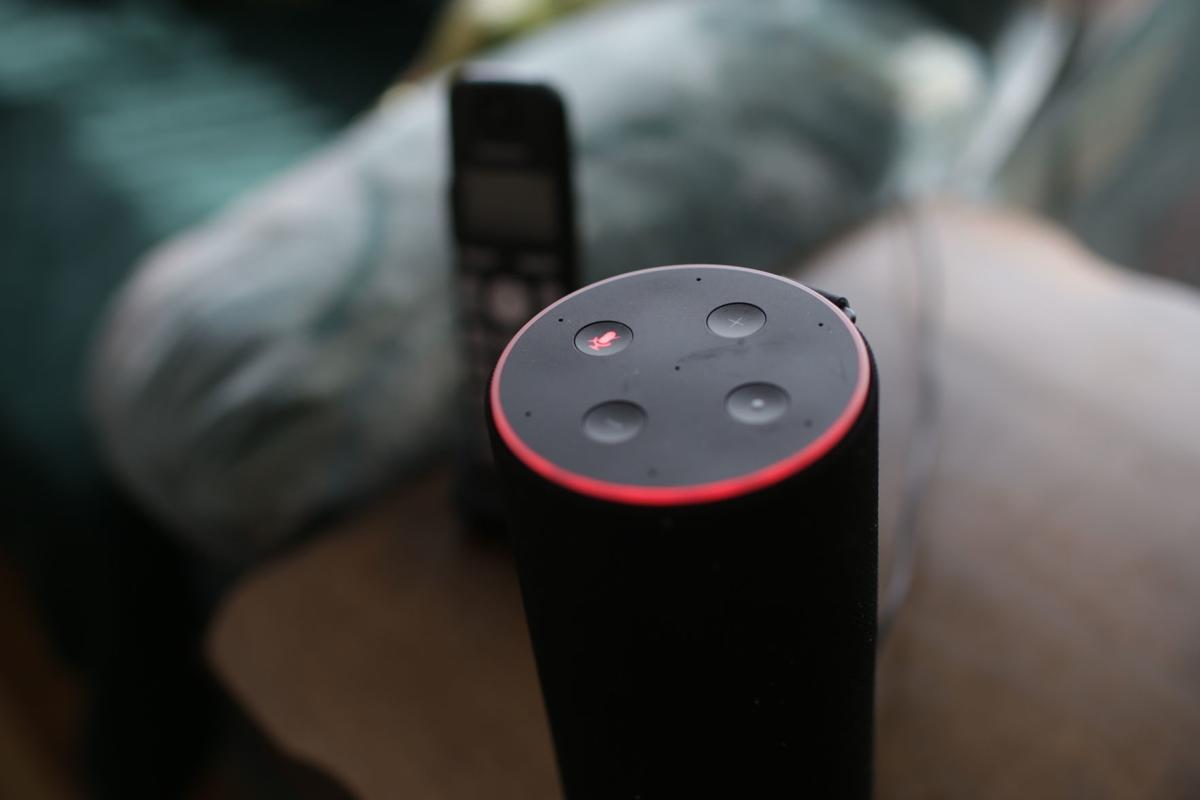 The Constant Companion tower is seen at Ed McKim’s home on Wednesday, Aug. 21, 2019. The device acts like the popular device Alexa from Amazon and allows McKim to make calls to family or emergency responders by talking to it.

A Constant Companion puck and wifi hot spot are seen at Ed McKim’s home on Wednesday, Aug. 21, 2019. The device has military grade encryption to prevent hacking and allows for McKim to call family members, emergency responders, and has other features like checking the weather by asking it.

A customized voice assistant is being rolled out in Idaho Falls to provide connections for senior citizens alone at home.

In July, Visiting Angels of Eastern Idaho agreed to help test pilot a new voice-activated tool to help care for senior citizens. The Constant Companion is a network of Amazon Alexa devices that come pre-programmed with tools that are meant to provide companionship and security options for people who already receive at-home nursing care.

Those devices are being officially rolled out to homes this week, with Ed McKim being the first eastern Idaho resident in the official program. The 93-year-old has gotten help from the home care company since 2016, and as his vision and hearing continue to fade, the Constant Companion has arrived as a brand-new tool for him to use.

“This type of technology, used properly, is going to be a very good service for him,” his daughter Marilyn Culp said.

The main companion device sits next to McKim’s recliner in the living room. Smaller items are plugged in his kitchen, bathroom and bedroom, and are connected wirelessly through a secure hotspot router. All of the network is voice-activated and can access any tool or trick in the Alexa database except for some of the shopping options.

Culp and the two nurses from Visiting Angels have taken the lead in getting him used to the new devices. Nurse Rebecca Ricks suggested that the devices could be especially helpful for new clients in the future, who might be more comfortable letting a voice-assistant into their home than a caretaker they’ve never met before.

“I think this is really going to help people feel less alone if they’re not going to do 24-hour care,” Ricks said.

Four weeks after the pilot program started, McKim was still adjusting to the new device. There were many voice commands to remember; saying “Help” did not trigger the same result as “Call for help” and the emergency response works differently than the alert button he used to keep in his pocket.

Calling for help sends a message to the Constant Companion dispatch, which pops up a file of McKim’s information on its computer. The company then sends an alert to the local ambulance and his family if assistance is needed. Constant Companion claims the voice-activated system is three times faster than other medical alert buttons and provides a more reliable connection.

McKim has not needed to use that feature yet and is still getting used to all the options available to him now. He has a large record collection at his home, so he’s used the companion to play music, but he said the biggest aid he’s gotten so far is keeping in touch with his children and grandchildren.

“I’m lousy at remembering phone numbers, but I can use this Alexa thing to telephone all of them,” McKim said.

In addition to the five phone numbers saved to his contact list through the devices, McKim’s system also provides customized reminders for his appointments and daily check-ins for Culp and the rest of his children.

Visiting Angels Director Scott Holmes said the devices would be offered for free to any families that were already receiving services from his company.

“To me, this is something the community really needs, and I want to get the tools out there as quickly as possible,” Holmes said.

Kauffman reports on health care and city events for the Post Register.